We are developing a non-invasive, transabdominal fetal oximeter, to provide worried mothers and obstetricians needed information regarding fetal well-being, namely fetal oxygenation, to reduce the number of unnecessary emergency C-sections. This is done by transmitting light in the near-infrared spectrum through the maternal abdomen and fetus to measure the oxygen saturation in the fetal blood using pulse oximetry. Pulse oximetry is a technique that utilizes the light absorption spectra of oxy- and deoxy- hemoglobin and captures a photoplethysmograph (PPG) from the vascular pulsations of the cardiac cycle. This PPG signal can then be used to calculate the oxygen saturation of the blood based on how much light was detected per heartbeat. In our case, a mixed maternal-fetal PPG is captured since light is traversing both maternal and fetal tissue, to which the fetal contribution can be isolated through Fourier analysis and filtering.

Cesarean section (C-section) is a major abdominal surgery which introduces significant risks to the mother and can have long-term effects on the respiratory health of the fetus [2][3]. While the World Health Organization has identified that an ideal C-section rate is between 10-15% to not be under- or overused, many countries report having rates much higher [4]. In 2014, the United States had an unacceptably high-rate of 32.2% [5]. This is in part due to the current paradigm used for monitoring fetal well-being.

Electronic fetal heart rate monitoring (EFM) was adopted in the 1970’s as a means of assessing fetal well-being during labor and delivery and decrease the incidence of cerebral palsy and neonatal death. However, the rates of cerebral palsy, neonatal death, low Apgar scores, and perinatal death remained unchanged with its introduction, while the rate of C-sections rose dramatically [6]. Despite the overwhelming evidence that EFM has not decreased adverse health outcomes, a high-proportion of C-sections are performed partly or fully in response to a non-reassuring EFM trace [7]. Current interpretations of such traces is that it is suggestive of inadequate blood flow to the fetal brain and, if left untreated, can lead to cerebral palsy, fetal acidosis, and other harmful conditions. However, studies have shown that interpretations of EFM traces are unreliable, produce a high rate of false-positives (99.8%), and may be related to a normal chemoreflex response of the fetus [8][9].

Clearly there is a need for new fetal well-being monitoring techniques. To address this issue and reduce the number of unnecessary emergency C-sections performed, we have developed a device that will non-invasively give physicians information on fetal oxygenation in utero, previously unattainable during critical stages of labor and delivery. 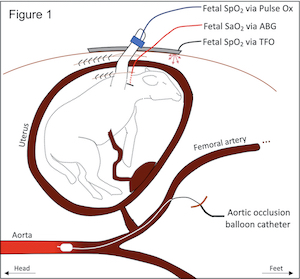 Fetal hypoxia was induced in 3 gravid term ewes (137.3±3.2 days gestation) by placing an inflatable balloon catheter in the infrarenal aorta via the common femoral artery . A fetal carotid arterial line was placed for continuous hemodynamic monitoring and arterial blood gases (ABG). The uterus was closed around the right fetal forelimb, and the laparotomy was closed, leaving the limb exposed for conventional pulse oximetry. The fetus’s depth from the ewe’s skin was determined, and the TFO device was placed on the ewe’s abdomen. The aortic balloon catheter was inflated in a stepwise fashion to decrease the ewe’s distal mean arterial pressure (dMAP) in 5mmHg increments. At each step, dMAP was maintained for 10 min, and fetal ABGs were recorded at 2.5, 5, and 10-min marks. The balloon was fully deflated after two consecutive measurements of fetal SaO2 <15%. The fetus was recovered for 45 min, and the stepwise gradient was repeated for a second round. At each dMAP level, the average fetal oxygen saturation measured by the TFO (SpO2) was compared to the average fetal SaO2. 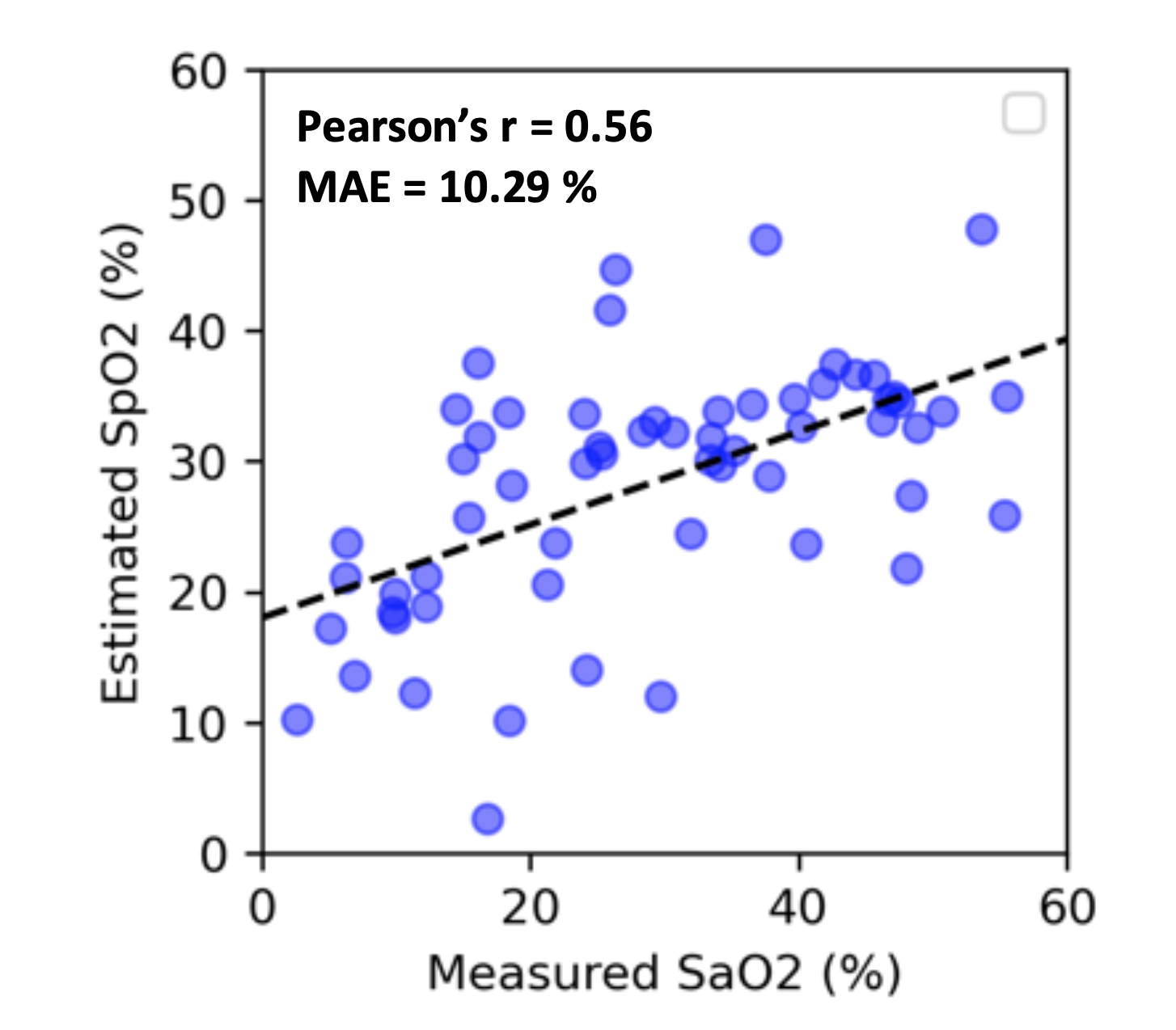 We evaluated the performance of TFO in estimating fetal SpO2 using the three hypoxic lamb experiments. We used 10-fold cross validation to generate the plot and compute the mean absolute error (MAE) as well as Pearson’s correlation factor (r) between the estimated SpO2 and measured reference fetal SaO2. The results show that TFO’s estimated SpO2 values are correlated with reference SaO2 with a Pearson’s r of 0.56, and TFO SpO2 estimates have a MAE of 10.29%.

We recently developed a protocol to evaluate TFO in pregnant women. The evaluation of TFO in antenatal testing is an important step towards its integration in intrapartum fetal monitoring in the hospitals. The TFO is evaluated concurrently with non-stress test (NST) visits of the patients participating in the study. Only healthy pregnant women with no expected risk or complication to themselves or their babies, with a singleton pregnancy, and cephalic fetal presentation at >36 weeks of gestation are enrolled in the study. During the study, the skin color of the patient is recorded based on a reference skin color catalog . Less light is scattered back to the surface with darker skin color, therefore weakening the signal received. The distance from maternal abdomen’s surface to closest fetal tissue is measured using ultrasound. The TFO optode is placed on the abdomen where the closest fetal tissue is measured. Double-sided skin-safe tape is used under the optode to ensure good skin contact and to prevent the optode from falling or moving. EFM used in NST visits is placed concurrently with the TFO and monitors maternal heart rate (MHR), maternal SpO2 and fetal heart rate (FHR). This study aims to perform a preliminary demonstration of feasibility of TFO in human subjects via proxy metrics like FHR and MHR.

A 15 to 20-minutes-long dataset is collected during each study. The feasibility is demonstrated by looking at TFO’s capability of estimating maternal (MHR) and fetal (FHR) heart rates. Reference heart rate values are collected using cardiotocography. The TFO MHR is extracted from the data collected by nearest detector (PD1) to the light source on the TFO optode. In order to extract the fetal signal from the mixed signal, following steps are applied to the data: (1) Mixed-signal is bandpass filtered between maternal heart rate and 360 beats per minute (BPM) to remove low and high frequency noise components, (2) Recursive Least Squares (RSL) Adaptive Noise Cancellation (ANC) is applied to the filtered mixed-signal using the maternal signal from nearest detector (PD1) as the reference signal, (3) The result of adaptive noise cancellation is analyzed in frequency domain using Burg power spectral density (PSD) of order 20, (4) The highest peak in the Burg PSD between 110 BPM – 270 BPM (typical range for FHR) is estimated as FHR.

The following Figure shows an example of maternal, mixed and noise cancelled fetal signal spectrograms computed using Burg PSD and 1-minute long windows with 30 seconds of overlap. The reference and estimated FHR and MHR are also plotted on top of the spectrograms. We see that applying ANC to the mixed signal resulted in reducing the amplitude of MHR and its second harmonic, and therefore made FHR peak more distinguishable. Cancelling 2nd harmonic of MHR is particularly important since it could sometimes lie very close to FHR. 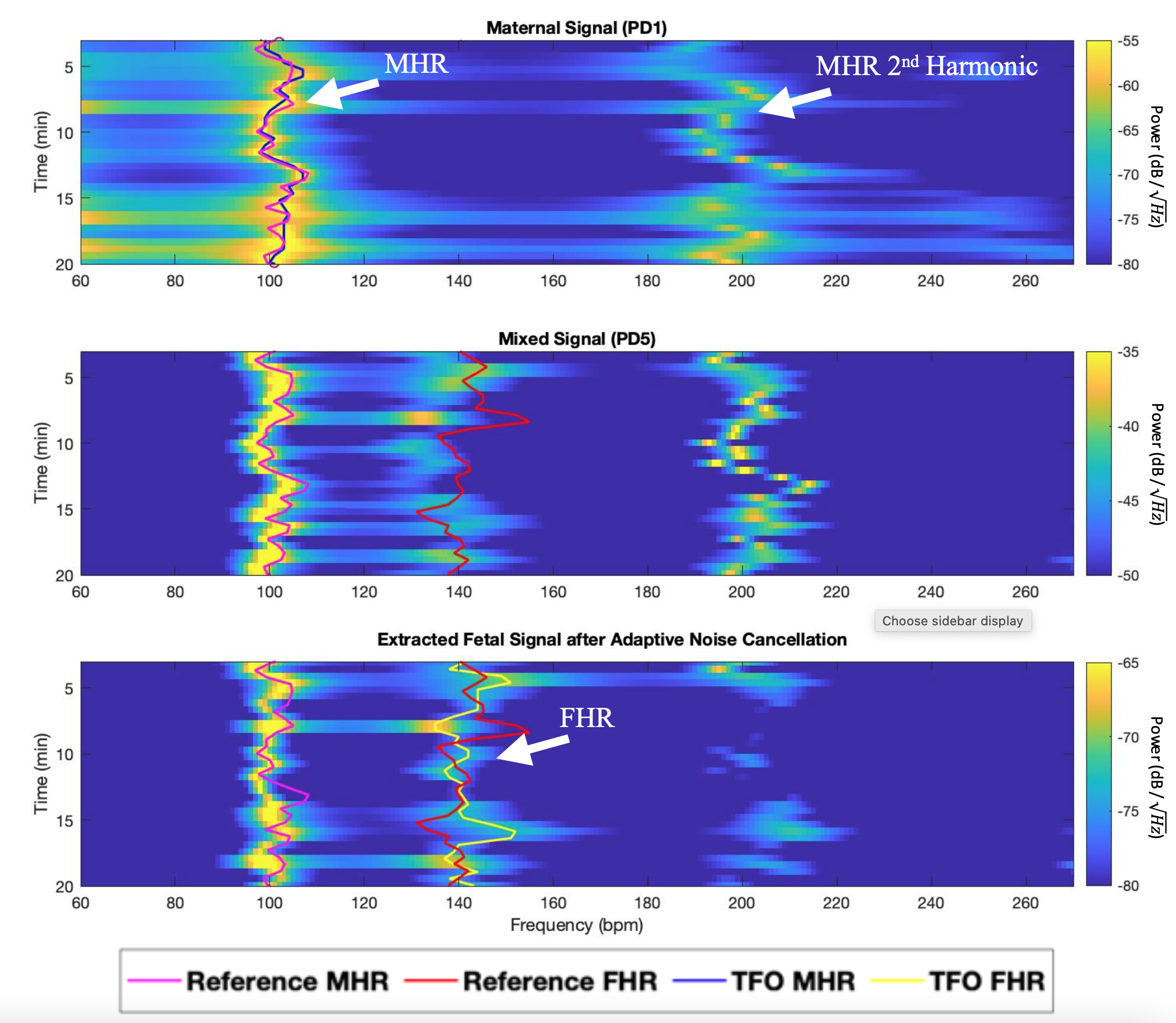 The results of estimating FHR and MHR in three different patients are summarized in Table I. The results show that MHR could be very accurately estimated, and FHR could be extracted with reasonable accuracy, during a 15-20 minutes long time period, in human subjects with various skin colors and fetal depths.

Some of this material is based upon work supported by the National Science Foundation under Grant No. IIS-1838939. Support from a seed grant from CITRIS and the Banatao Institute at the University of California is also acknowledged.